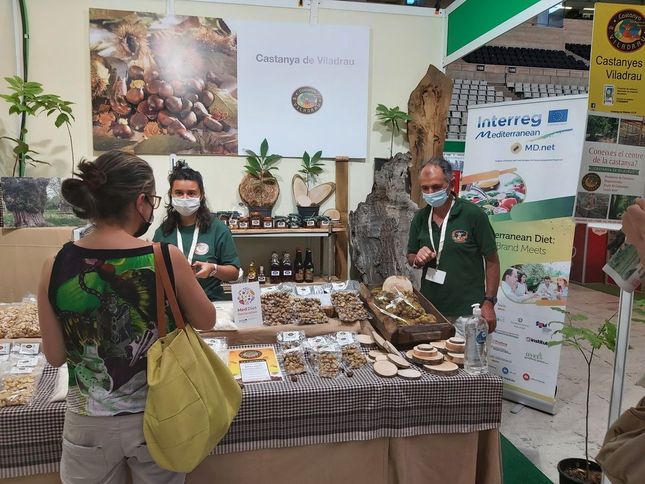 From 8th to 11th July, Prodeca was at the BioCultura Fair promoting the “Med Diet Declaration” together with “La Castanya de Viladrau”, one of the first agri-food Catalonian endorser companies

Prodeca was promoting the “Med Diet Declaration” campaign at the BioCultura, the largest fair for ecological products and responsible consumption in Spain with 350 exhibitors dedicated to the sector of organic food, ecological cosmetics, sustainable fashion, healthy home, responsible tourism, handicrafts and environmental NGOs. Parallel to the exhibition, more than 400 activities (face-to-face and online) were held and around 14,000 visitors could visited fulfilling the capacity regulations required by Covid-19.

Prodeca launched the “Med Diet Declaration” among the olive oil sector one month ago and it is planned to extend this promotion in the next months to reach all Catalonian agri-food sectors to increase the current number of 15 endorser companies. BioCultura has been an exceptional opportunity to support the campaign among this specific target strongly aligned with the “Med Diet Declaration” values in which there is a strong participation of companies potentially committed to defend, promote and preserve the Mediterranean Diet. In this sense, Prodeca could take advantage of this fair to encourage visitors, mainly agri-food companies, to adhere and join the “Med Diet Declaration”, a campaign aimed at companies and individuals that promote the Mediterranean Diet.

Although Prodeca had an own exhibition stand, this was presented also at the exhibition stand of “La Castanya de Viladrau”, one of the already endorser companies and beneficiary of the InnoBaP-MD.net support programme. In this way, the significance of joining the "Med Diet Declaration - People, Culture, Food" could be better explained, emphasising the importance of being part of an interregional community that strongly believes in the Mediterranean Diet as an asset for a better appreciation and valorisation of agri-food products.